Binwa Kashindi was born in the midst of civil war within the Democratic Republic of the Congo. As a toddler, Binwa and her family, along with tens of thousands of others, escaped across the Congolese border. They found relative safety and stability in a United Nations Refugee Camp in the United Republic of Tanzania. The family expected to be able to return home, someday, when the violence ended. Until then, they must remain in refugee camps while seeking safe haven.

Esther, age 2 (pictured), and Kashindi, age 6, were born to Binwa while residing in the refugee camp.

The African Great Lakes region encompassing both the Democratic Republic of the Congo, Tanzania, and their bordering countries, remains embroiled in conflict, including physical mutilation, sexual violence, and killings.

By the end of 2020, more than 715,000 Congolese refugees, mainly women and children like the Kashindi family, relied on the UNHCR. With the support of Gulf Coast JFCS, Binwa’s cousin Hussein, also a Congolese refugee, was already established in Tampa Bay. Hussein and his partner Sakina applied to welcome his extended family to his home joining his two children.

Throughout their journey, this International Organization for Migration (I.O.M.) bag – with instructions on meeting her Gulf Coast JFCS case manager – never left Binwa’s side. Every refugee receives this bag from the I.O.M., to hold important documents. For 60 years, this iconic bag has represented refugee resettlement for Gulf Coast JFCS and nearly 200 other locations around the globe.

The Kashindi family endured days of travel to find the safety of the family. Their journey was filled with new smells. New sounds. New foods.

Binwa, and her children Kashindi and Esther, will receive resettlement case management services through Gulf Coast JFCS until they achieve self-sufficiency. For Esther, Kashindi, and Binwa, the healing begins now. 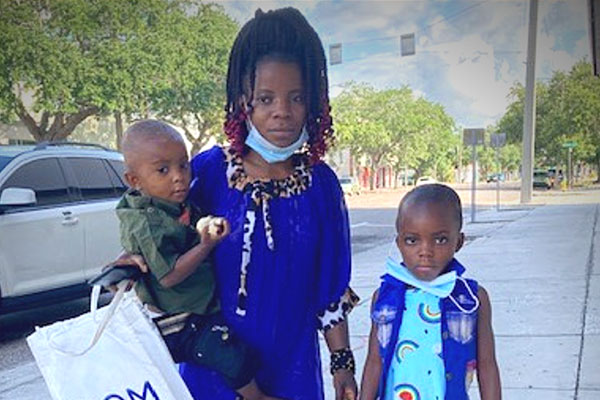