Nathan is a kind and polite 9th grader who loves gaming and all things science fiction. He even wants to be a video game designer when he grows up! He is not a huge fan of playing outside or watching sports, but he will toss around the ball with his little brother Aysa. He would love to have a pet cat because he likes how calm they are – he feels like he is the same way.

Nathan enjoys learning about math in school and if he had a superpower, he would definitely be a genius! He’s always been curious whether the world is flat or round, and he is looking for a family who can help him answer all of his science questions and take him to travel the world. His favorite foods include steak and orange chicken, and he likes to listen to pop music the most.

Nathan would do best with a family who is caring and loves to cook. He wants a family who will accept him for who he is, and who will be there for him and his brother Aysa through anything.

Aysa is a smart and silly 2nd grader who is looking for his future family to play games and tell jokes with him. He enjoys listening to instrumental music, playing video games, and especially playing outside if it involves swimming and being in the water. If Aysa had a super power, he would want to be able to be invisible and he would have his half shark, half fish pet to tag along with him!

Aysa likes to watch the Tampa Bay Bucs play, and when he grows up he wants to be an adult… Just kidding! He would love to be a Paleontologist because he loves learning about science and animals in school. He thinks everyone should go hunting for dinosaur bones at least once in their life! Aysa likes that he is funny and unique, and if he could have the answer to any one question, it would be why the chicken is always crossing the road!

Aysa would thrive with an affectionate, goofy family who wants to play with him, help him grow and learn, and take care of both him and his older brother Nathan. 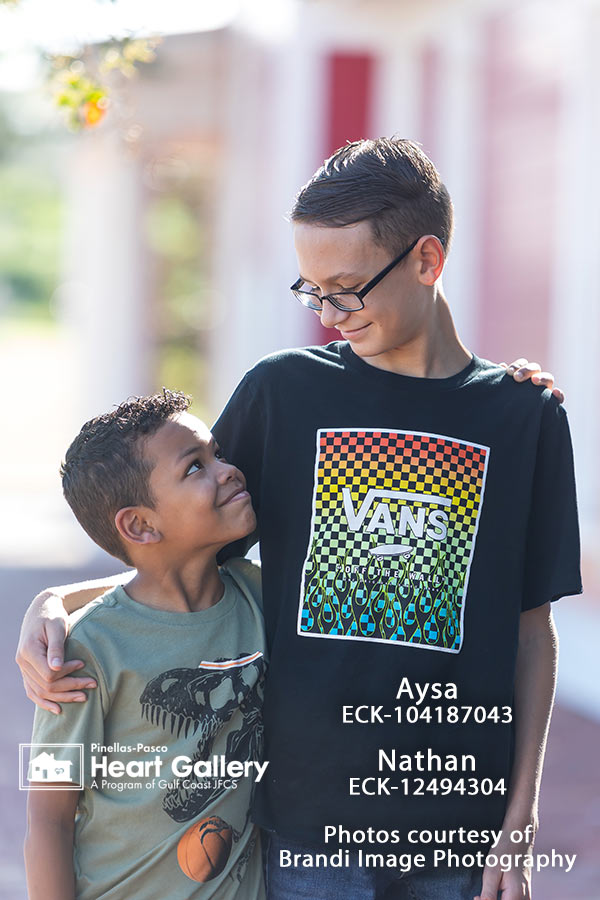